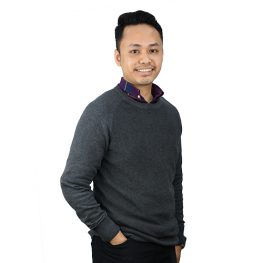 Hanif Faiq portfolio caught the attention from award-winning Rhythm & Hues Studios, an American visual effects and animation company that received the Academy Award for Best Visual Effects for Babe ( 1995 ), The Golden Compass ( 2008 ), and Life of Pi ( 2013 ). His career in the animation industry started as he became their 3D Tracking and Matchmover Artist and gotten involved in two Hollywood feature films namely Percy Jackson and The Sea of Monster ( 2013 ) and Into the Storm ( 2014 ) – a job that challenged his artistic and technical abilities to the max!  In 2016, he also was given the opportunity to work in Syafiq Yusof ‘s movies, Desolasi and Abang Long Fadil 2 as a Visual Effects Artist (freelancer). Other than that, He also involved as Visual Effects Artist in other local and international movies as well such as Zombitopia (Malaysia), HR2 (China) and Untold Body (China). Now, he is  proud to be able to contribute to his alma mater by being a Specialist.